After having spent the past six months around farms in Vermont, Meghan and I were really interested to see what the farming was like in Cuba.  We spent most of our trip looking for farms and talking about what we saw. Meghan’s Spanish allowed us to navigate the sometimes complicated paths to the outskirts of town and to chat with farmers.

Farming was in action all over the country; from the Organiponicos in Havana, to the Finca la Chiquitica in rural Vinales, and alongway oxen plowing fields, tobacco farms, greenhouses, and wild vegetables growing in the streets. But this was a vacation after all and so despite seeing lots I haven’t done the research to really understand and explain what’s going on in Cuba. I thought it would be fun to share some observations.

Some of the surprising and eye-opening included:
-Even in another country and climate the organic vegetable farms look the same and even in Spanish the farmers we met spoke the same language as us.

-Resourcefulness! Cubans are brilliant at fixing, building, and modifying the tools they have. With a shortage of imported Chinese equipment they've made due with what they have. Scrap materials are put to use.
-Draught-power are in use everywhere. Oxen were behind plows and sledges while horses pulled homemade carts on the road. You'd see them in town snoozing while their owner sold veggies out of the back of the cart.
-Everywhere there were cows, horses, goats, and sheep grazing from 30' lead lines. It looked like farmers moved them from day to day.
-And when it comes to cows...it's illegal to slaughter them (like 10 years in prison!). I don't know all the ration behind this, perhaps nobody does, but I heard from Cubans that it's because the cow is an energy intense food (I'd disagree). Instead seafood, pork, and poutlry make up the meat in most Cuban's diet. Children and the elderly are given a government ration of beef and well if you have money you can buy it.
-There were few tractors and when we did see them they'd often be working alongside draught animals. 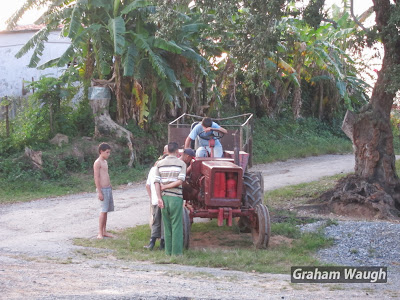 -In Havana and elsewhere wild volunteer cucurbits grow out of the ditches. I even saw a large okra plant growing out of an old cracked driveway in downtown Havana.
-In Vinales, renowned for its tabacco, there was an equal amounts of black beans growing. I didn't get to ask if the black beans are an intended part of the tabacco crop rotation. We also saw rice, corn, and wheat. On a run one day I passed a farmer spreading wheat to dry on the pavement. 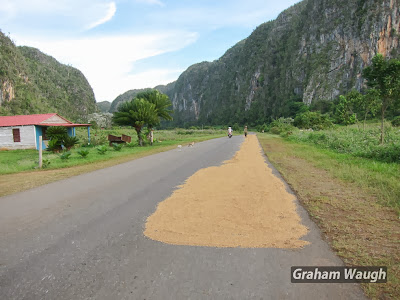 -There were no vegetables or fruit for sale in the grocery stores or bodegas. Instead, all over Cuba, produce is sold at markets. There were farmers' markest (Mercado Agropecuarias) in the cities and everywhere was produce sold from horse carts, wheel barrows, and hole in the wall shops. We'd go hunting for them in each place. Meghan had learned that Cuban farmers are among the highest paid workers in the country because they can set their own prices. But we wondered how all these competing vendors made a living. 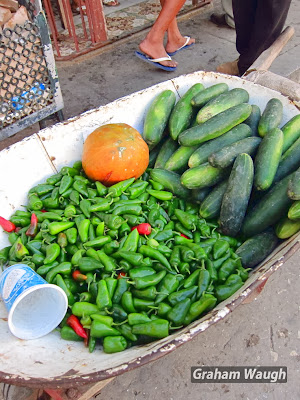